The Committee, an international cabal of industrialists and media barons, is on the verge of privatizing all information. Dear Diary, an idealistic online Underground, stands in the way of that takeover, using radical politics, classic spycraft, and technology that makes Big Data look like dial-up. Into this secret battle stumbles an unlikely trio: Leila Majnoun, a disillusioned non-profit worker; Leo Crane, an unhinged trustafarian; and Mark Deveraux, a phony self-betterment guru who works for the Committee.

Leo and Mark were best friends in college, but early adulthood has set them on diverging paths. Growing increasingly disdainful of Mark’s platitudes, Leo publishes a withering takedown of his ideas online. But the Committee is reading — and erasing — Leo’s words. On the other side of the world, Leila’s discoveries about the Committee’s far-reaching ambitions threaten to ruin those who are closest to her. 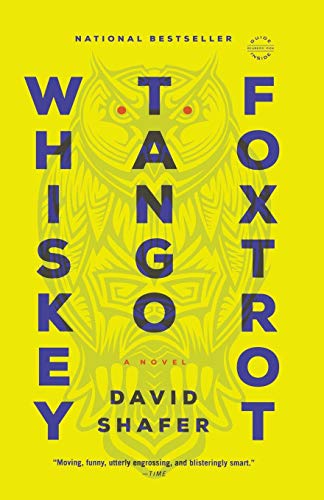 In the spirit of William Gibson and Chuck Palahniuk, Whiskey Tango Foxtrot is both a suspenseful global thriller and an emotionally truthful novel about the struggle to change the world in- and outside your head.

“Starred Review. Shafer hits all the right buttons in his debut as he mixes crime fiction, espionage, and SF in a darkly comic novel.” – Publishers Weekly

“An edgy, darkly comedic novel whose characters and premise are as up-to-the-minute as an online news feed but as classic as the counterculture rebellions once evoked by Edward Abbey and Ken Kesey… It’s possible that Shafer is remaking the international thriller into something more humane and thus more credible.” – Kirkus

“Hilarious, moving, and wildly ambitious, David Shafer’s Whiskey Tango Foxtrot reads like a plot against America dreamed up by the NSA and then ghostwritten by Don DeLillo – a love story-cum-international thriller about our surveillance society that’s so convincingly paranoid you’ll tape over your webcam. Forget debut: it marks the arrival of a major new writer.” – Adam Ross, author of Mr. Peanut

“Roaming from Burma to Oregon to a mysterious ship in the open ocean, David Shafer’s debut novel is a stylish, absorbing, sharply modern hybrid of techno thriller and psychodrama that bristles with wit and intellect and offers a dark, incisive vision of the global consequences of turning our lives into collectable data.” – Maggie Shipstead, author of Astonish Me

“Outlandishly clever. Evoking the technological-paranoia of Philip K. Dick and the verbal pyrotechnics of David Foster Wallace, Shafer’s digital take-over is absurdly comical and all too familiar. The characters are complicated, fascinating, and fully engaging while the threats feel frighteningly real.” – Joe Meno, author of The Great Perhaps

“David Shafer’s amazing debut novel should be a controlled substance, its addictive quotient of the highest order. I devoured it imagining this is what a brainstorming event between Thomas Pynchon and Edward Snowden would deliver.” – Bob Shacochis, author of The Woman Who Lost Her Soul

“Hilarious and chilling, fast-paced and thoughtful, Whiskey Tango Foxtrot is literary entertainment of the highest order. While the novel reads like a comic thriller, it speaks powerfully to our over-connected, over-watched, privacy-depleted moment. I admire the hell out of it.” – Ken Kalfus, National Book Award nominated author of Equilateral

Are you a new parent looking for the best books to read to your child? Whether you’re looking for classic children’s stories or more contemporary titles, this list has something for everyone. Featuring some of our favorite books that help teach kids about life, happiness, and love, these titles will keep your little one entertained…

Following the success of his previous book The Commando Way, Damian McKinney delves deeper into the links and lessons of achieving high performance in the military and business worlds. Drawing on his own experience as a Royal Marine and as a highly successful international business consultant, McKinney writes about the values of being a Marine…

ESL is an acronym for English as a Second Language. There are some who use the term ESL as EFL which is the same thing and means English as an additional language. ESL or EFL English programs for studying languages are designed for non-native English users who want to improve their English and improve their…

90s popstar Ben Wilde and his bride Lisa return from honeymoon to find a cuckoo in the nest and a surprise European tour in the diary. Lisa befriends neighbour Rosemary, who is also home alone while husband Nigel travels for work. But will the women’s grim suspicions be confirmed, or does absence make the heart…

The natural wonders of Iceland as well as the best thermal spa in the world, Icelandic culture, and the world-famous northern lights make Iceland one of the top tourist destinations in Europe.  If you enjoy nature, long road trips, and unusual attractions, this is a must-see destination. There are so many uninhabited places in Iceland…